Certainly, you’ve all been hard at work, stretching, pulling, warming up and cooling down with the previously mentioned Tongue Buffing Exercises: “Makhaarij Al-Huroof: Al-Lisaan”. Now it’s time to step it up and look at what you can do with the tip of your tongue.

Al-lisaan: contains makhaarij for 18 letters. These are divided across 10 points of articulation, which are categorised as 4 main areas. These are: Aqsal-lisaan; Wasat Al-lisaan; Haafat Al-lisaan; and Ra’sul-lisaan, or Tarful-lisaan. I’ve covered the first three areas in a previous post; below are the letters which emerge from Ra’sul-lisaan [1] (the tip of the tongue).

First, it is important to note that ra’sul-lisaan is the very tip of the tongue, and tarful-lisaan [2] is that small portion of the tongue just behind the tip. This is illustrated in the diagram below. This post covers both these regions as they are generally considered to be one main area. 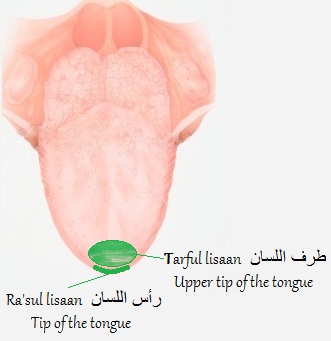 Within this region, there are five points of articulation, producing 11 letters. These are:

The very tip of the tongue, with that which coincides with it from the hard palate, behind the two front teeth produces the letter

with note that a ghunnah passes through the nasal passage to complete the sound for noon. 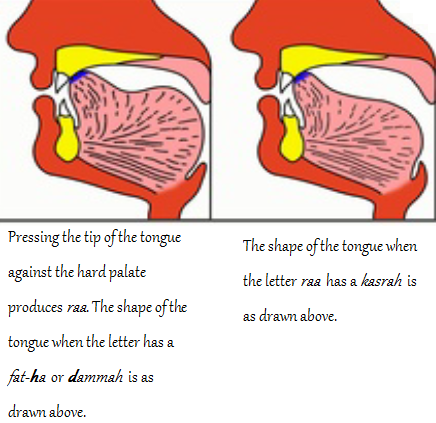 When the tip of the tongue, alongside a small area from the upper tip (tarful-lisaan), are pushed off the hard palate, the letter

is produced. The area referred to in the hard palate is slightly off that area which produces noon, as comparable in the diagrams above. The letters noon ( ن ), raa ( ر ), and laam ( ل ) are called Al-Ahruf Al-thalqeeyah [3]. Note: laam was covered in a previous post. The reason for this name is because they are produced from thalq al-lisaan [4], i.e. it’s tip.

Here’s food for thought: did you know that thalq also means “slip”. When your tongue “slips” and you let out a secret, it happens so fast. Thalq is just another characteristic of the tongue. It “slips”quickly after producing the consonant letter in a direction respective to a fat-ha, dammah, or kasrah. 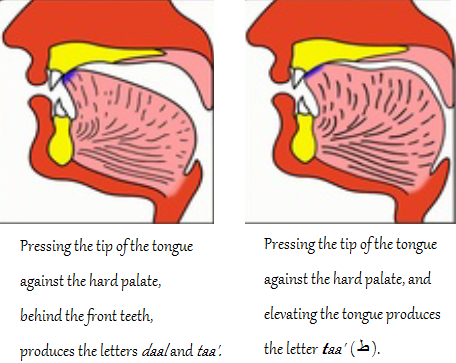 Between the upper tip and hard palate, directly behind the two front incisors, the following letters are produced,

With note that the letter taa’ ( ط ) leans against the front teeth slightly more than taa’ and daal because of the strength needed in producing its sound. These three letters are called Al-Ahruf Al-Natee‘ah [5] because they emerge from the “skin” i.e. nat’ or “gum” which covers the upper back of the front teeth.

9 – Between The Tip And Top & Bottom Teeth 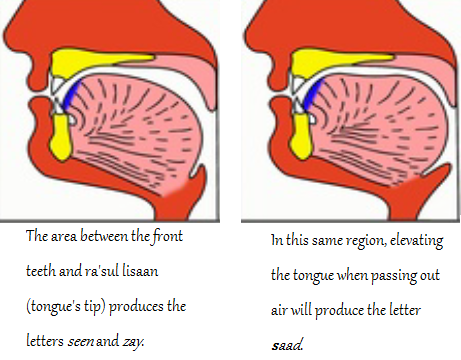 Between the top and bottom teeth is an open area which is generally known to make a hissing sound. With the tip of the tongue, this area is also the makhraj for

with note that when pronouncing these letters, the front sides of the tongue may touch some of the upper teeth. These three letters are named Al-Ahruf Al-Asleeyah [6], because they are produced from the very tip of the tongue 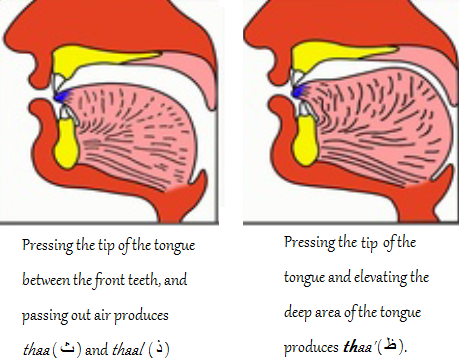 These three letters are called Al-Ahruf Al-Lathaweeyah [7] because their point of articulation is very close to the gums of the two front teeth.